It is one of the worlds most geographically dispersed nations with over 1,192 coral islands dotted along 180 kilometers. This unique setting is the heart of Maldivian tourism, offering over 140 hotels, each self-contained on its own island This is a paradise for divers, surfers and sailors and each of its beautiful resorts is set on its own private island, offering everything from underwater spas to open-air cinemas; sunken wine cellars to treetop restaurants. Enjoy snorkeling, diving, relaxing in lagoons teeming marine life and spot dolphins while you sip a cool beverage. Chill out and relax with a good book, or pamper yourself with a blissful spa treatment, and dine in style on your very own private island.​

Currency: Maldivian Rufiyaa (MVR), which is a non-convertible currency, so you will not be able to exchange it outside the country. There are banks in the capital, Malé, and no ATMs at resorts, but credit cards and dollars will be widely accepted

Languages: Dhivehi, but English is widely spoken in resorts

Plug sockets: Electricity supply is 220V to 240V, 50Hz AC. The standard socket is the UK-style three-pin, but an international adaptor is wise, in case of variations 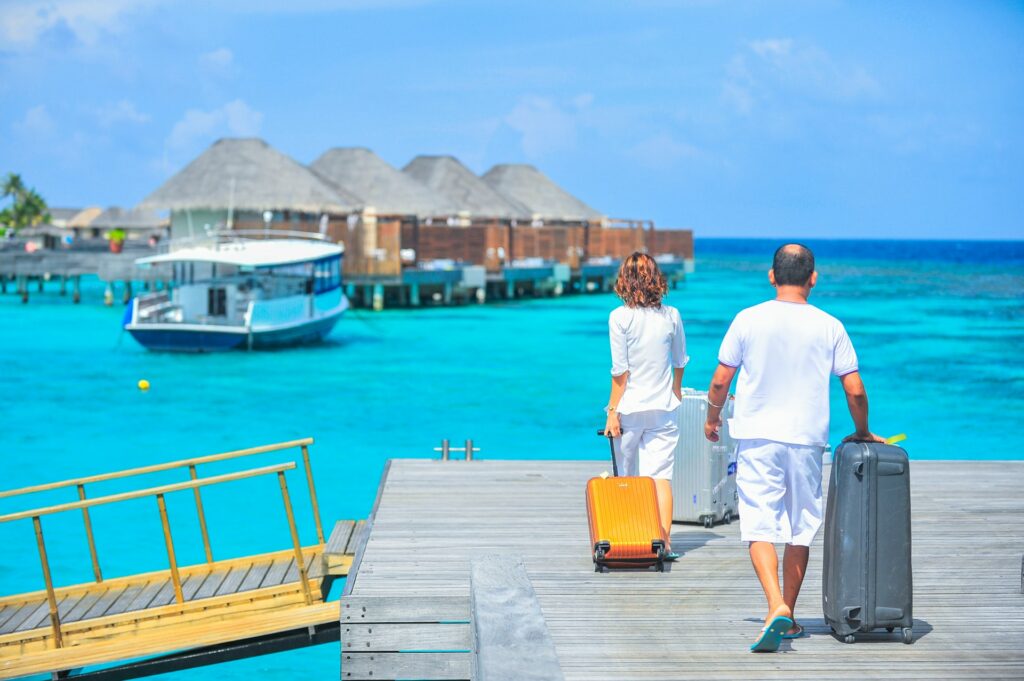 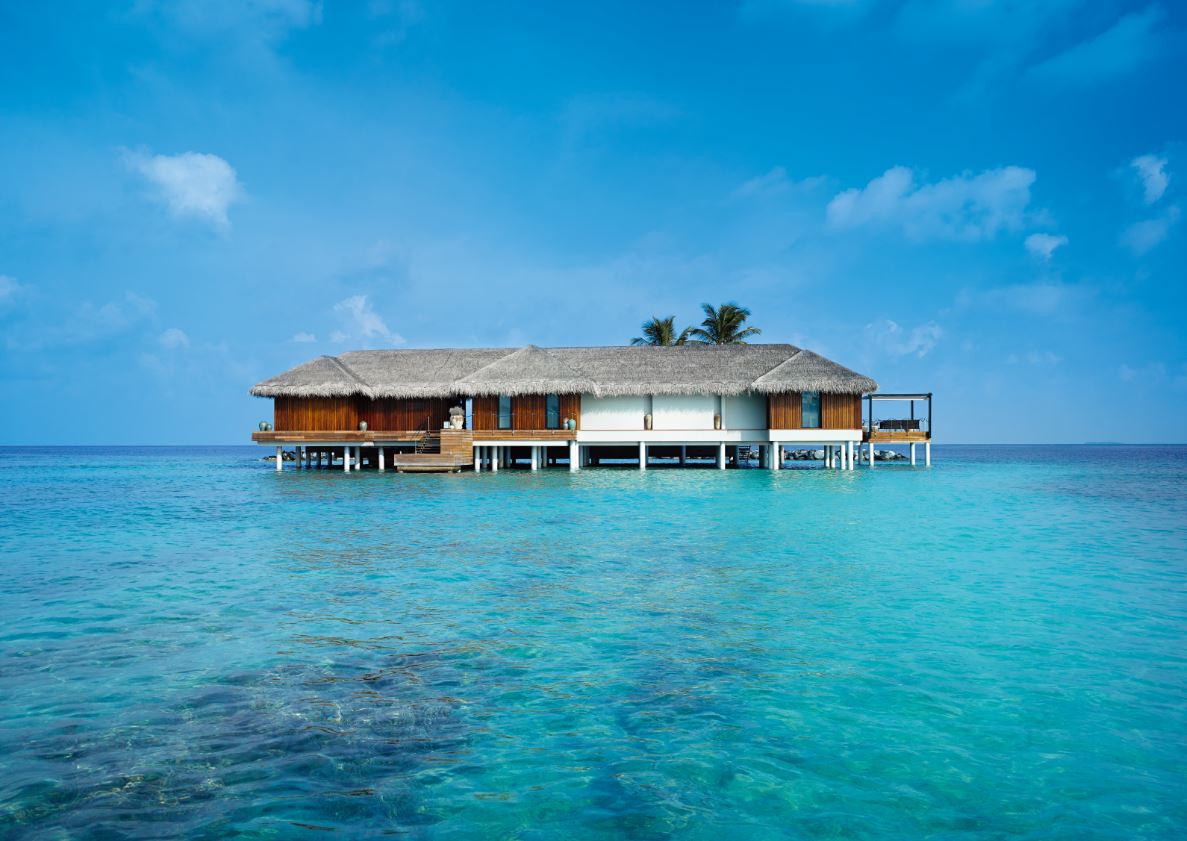 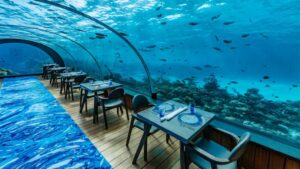 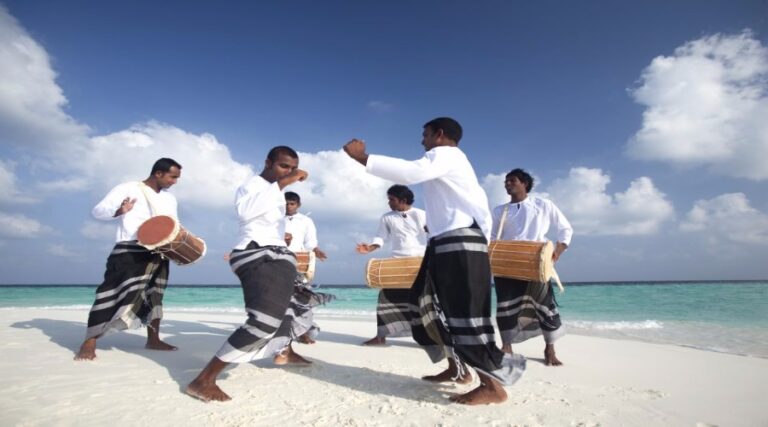 The best weather is December to February, with low humidity, blue skies and only occasional rain, and pricing reflects that. Temperatures peak In March and April and prices tend to come down, with the lowest season being May-November (except August for school holidays) when there is a higher chance of rain and storms.

The necklace of islands that make up the Maldives is characterized by beautiful blue oceans and tropical islands with swaying palm trees and sugar-white sandy beaches. This spectacular archipelagic nation is home to a diverse array of wildlife, both on land and in the sea, ranging from tiny geckos to mammoth whale sharks.

Maldives is a devoutly Muslim country and its 342,000 people are known as Dhivehis, living on just 185 of the 1,200 islands. They have their own cultural identity, but have also borrowed from the Sri Lankan, Indian, Arab and North African travellers who passed through here over the years. Tourism started just 40 years ago and has given a boost to traditional crafts such as mat weaving, lacquer work, handicraft, and coir rope making and it’s possible to visit local islands for a glimpse of life. A quintessential Maldivian cultural display is Bodu Beru, performed to pulsating drumbeats on the beach.

A pretty small capital, Malé bursts at the seams of the island it’s on and is filled with miniature skyscrapers, mosques and buzzing mopeds. Often-visited spots for tourists might include the oldest mosque in the country, Hukuru Miskiiy or the newer shinier Grand Friday Mosque, while the National Museum and the bustling fish market are also worth a look. You can stock up on essentials, find souvenirs, or try some local treats at the numerous teashops.

Most early tourism grew up around here, given its proximity to the capital and airport, and it is still one of the most popular areas. Some of the luxurious well-known resorts in the area include Jumeirah Vittaveli, Banyan Tree Vabbinfaru, Cocoa Island by COMO, One&amp;Only Reethi Rah, Per AQUUM Huvafen Fushi, Taj Exotica, Four Seasons Kuda Huraa and Gili Lankanfushi, each of which sits peacefully on its own private island. The area is also home to Maafushi Island, one of the most successful islands for locally-run guesthouses, popular with those on a budget. Some of the best surfing breaks are in this area, while the channel that runs between North and South Male Atolls – Vaadhoo Kandu – is known for its great dive sites and Gaafaru Falhu Atoll, north of North Male Atoll, is a good choice for shipwreck dives. Shark Point – Kuda Faru – is in North Male Atoll, populated by white-tip and grey-tip reef sharks, while Bodu Hithi Thila is known as a prime manta ray-spotting site from December to March

The whale shark is the world’s largest fish and these gentle giants are resident in the Maldives year round, attracted by its plankton-rich waters. May-September is their most active time and one of the best places to see them is South Ari Atoll, part of the main Ari Atoll, west of Male. There are around 80 islands within Ari Atoll and several even have artefacts of old Buddhist and Hindu settlements. Resorts here include Constance Moofushi, the W Retreat &amp; Spa, LUX South Ari Atoll and Conrad Maldives Rangali Island, which boasts an underwater restaurant

In 2011, the entire atoll was designated a Unesco World Biosphere Reserve as a marker of its incredible biological diversity. There are 75 islands in the atoll, 13 of which are inhabited and the area is also known for its handicrafts, such as lacquer work and feyli, the fine woven cotton sarongs you will often see local men wearing. Some of the top luxury hotels in this atoll are Four Seasons Landaa Giraavaru, Anantara Kihavah, Soneva Fushi, Amilla Fushi and Dusit Thani.

Archaeological finds reveal that the islands were inhabited as early as 1500 BCE. The first settlers arrived around 500 BCE and are thought to have been Aryans. In the pre-Islamic period (before CE 1153), according to the accounts of Persian and Arab travellers, the Maldives was ruled by women. After that date, only four queens ruled, the last one in the early 16th century.

Contact with Arab travellers paved the way for the Maldives to adopt the religion of Islam, which gradually replaced Buddhism. In 1153–54, King Dovemi Kalaminja officially accepted Islam.

Early settlers were most probably fishermen from Tamil Nadu in southern India and the west of Sri Lanka and its remote location has always proved a welcome staging post for traders and explorers crossing the Indian Ocean between Asia and Africa. Islam arrived in the 12th century and sultans ruled for centuries, but there are also relics of Buddhist and Hindu periods prior to that. It became a British protectorate in 1887 and independence came in 1965, with the Maldives remaining a sultanate for a few years, before becoming a presidential republic in 1968